I purchased this motherboard manufactured by Gigabyte from Next, an Italian chain of franchising shops. Here it is the official overview page from Gigabyte site. 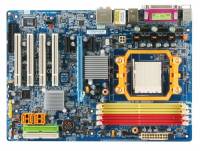 I chosed this one because it has plenty of features and expansion slots:

I'm very satisfied by the features of this motherboard and the price was fair (89.50 €). What really disappointed me are the mechanical caracteristics.

First of all the CPU mounting has a plastic plate on the back side of the PCB, which however is absolutely insufficient in preventing the bend of the board itself when the CPU is locked in the socket.

Also the heat sink on the Northbridge is absolutely inadequate. After a few minutes of work with the case opened, you cannot touch the sink without burning your finger. IMHO a fan or a bigger heat sink is required.

I removed 0.3 mm of thickness from the metal bracket that retains the CPU, so the lock force is lower and PCB bending is less horrible. In the photo the bend is still noticeable after the hack, let you imagine how it was before! On the Northbridge I replaced the heat sink with two (!) bigger ones and plenty of thermal grease: an horrible hack!

The nForce 430 Southbridge incorporates an IDE controller supporting ATA33/66/100/133. Using the amd74xx kernel driver, the using_dma feature is automatically detected and activated (according to hdparm(8) output).

The nForce 430 Southbridge incorporates a Serial-ATA controller with four ports. The kernel module to load is sata_nv. I attached an hard disk Western Digital WD1600JS 160Gb SATA2, as a rough performance test I run this command:

The wake-on-LAN function is supported via the MagicPacket; enter the BIOS Power Management Setup menu and enable the PME Event Wake Up option.

Unfortunately it does not work out of the box with Linux. On the internet there are several pages which suggest some fixes for this problem; one is using the pci-config to change the sleep state of the card, another is double-clicking the power button on startup. None of this fix works in my case, the definitive solution was found on this page.

The problem seems to be a bug in the forcedeth module, when you use the etherwake utility you must provide the MAC address in the reversed order. If the MAC address is 00:0F:EA:53:1C:E6, you can wake the motherboard running this command from another PC:

As usual you must enable the wake-on-LAN function before poweroff with this command:

Using Debian, you can conveniently add this command into /etc/network/interfaces as an up option:

A basic sound playback works out of the box with Linux; Master volume, PCM, Line-IN, CD and Mic channels are available into the ALSA mixer. The rear jacks for Line-OUT, Line-IN, MIC and the internal CD-Audio connector work as expected.

Unfortunately audio capture is less satisfactory: capture from the Mic does not extend to the full 16 bit range so it is always low and it is not centered, as you can see from the picture. As I switched on the capture channel, the silence wave is shifted up from the zero level. Loud sounds are clipped far before the 16 bit limit:

I experienced weird problems due - I think - the autoconfigure features of this audio board. Sometimes the mixer level for capture was uneffective: capture from Line-IN was sometimes locked very high and sometimes locked very low, despite how I slide the cursor. Other problems occurred experimenting with the load/unload of snd-hda-intel module and its options. Most likely probing the chip can leave the chip in an insane state (e.g. PCM level was missing), untill power cycled.

Those alternative models work instead with kernel 2.6.18 and ALSA 1.0.13, but I got problems with interrupts, requiring me to boot with irqpoll boot parameter.

The program alsamixer reports the card as an HDA NVidia with a Realtek ALC883 chip. The names of the channels are a bit misleading:

With the provided Windows software and driver, the audio can be configured to use 2, 4, 6 or 8 audio channels:

Five audio jacks (all but the Mic) can be reconfigured via software to perform different functions. The internal audio connector can be software configured to provide HD Audio or AC'97 Audio I/O channels. There is also the connector for digital audio IEC958 (S/PDIF).