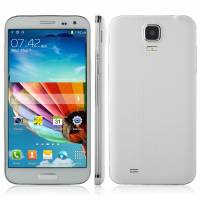 I purchased this phone on eBay for 163,88 € (October 2014), with PayPal protection and fast (24/48h) courier shipping. I was very satisfied by the domestic shipping (no custom fees) and extremely fast. It was instead unpleased when I discovered that memory specifications are plain fake!

Specifications by the seller:

RAM and storage: cheat and fake

The Android operating system on my Kingelon was purposely patched to report fake information about RAM and storage, there are also traces of cheating well known benchmark tools. Till now the evidences are in two files:

WARNING: Do not remove that files! Someones (here and here) reported that the phone was bricked after removing the changeram.xml file. It seems that the safe procedure is to edit the files with correct values.

AnTuTu benchmark v5.1.5 is cheated by the fake RAM amount, but not in the overall scores; it reports a scores of about 22400 even after getting rid of fakes.

After rooting the device and installing Busybox (see below), I did the following to remove the fake specifications (thanks to this post):

With the free command line tool I discovered that the RAM is actually 949880 kb, dividing it by 1024, the nearest above integer is 928 Mb, so I wrote that number as the total in changeram.xml (see below on how to remount /system in read/write mode).

To get the actual Internal Storage, just write 0 into userdata in changeram.xml (in my case the actual value is 2360 Mb):

The freepercent value seems not be used, so I left it untouched.

Finally I removed the line with item name=“package_name” from the file agold_cheat_evaluating_software.xml, this, indeed, didn't change anything in AnTuTu scores.

Get a shell on PC with Android SDK

Here it is how the phone is seen on the USB bus (using lsusb):

Download and install the Android SDK in your GNU/Linux PC, I used the $HOME/android/ directory. Then:

As you can see, I got insufficient permissions, so I need root privileges on the PC, just to start the adb server:

One of the first thig I tried into the shell is catting /proc/cpuinfo, to see the amazing eight cores… what a shame! Only one core! I thought immediately that my phone was broken or that I was cheated by the seller:

No fear! It is normal to see just a few cores, because the others are almost always stopped. To see all of the 8 cores just launch some CPU hungry apps (as Antutu benchmark) and check again /prco/cpuinfo, you will see all the cores at work. 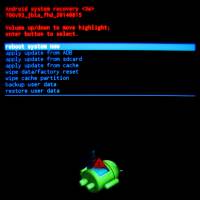 To enter the System Recovery menu:

WARNING! There is a bug in the Recovery, buttons does not work as stated:

This is the System Recovery menu: 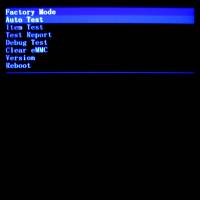 To enter the Factory Mode menu:

This is the Factory Mode menu:

Devices based on the MT65xx chip can be put in Download Mode, a state in which the flash memory can be formatted and reprogrammed. To activate this mode: turn off the device, remove the battery, and connect the USB cable to a PC (removing the battery is not strictly required). A communication interface is activated just for a few seconds (2 or so), the MT65xx device will keep the communication interface alive longer (as long as required) if it detects a data flow from the PC (Example: from SP Flash Tool).

This is the lsusb output during the time the interface is exposed:

The kernel registers the activation/deactivation of the serial interface in its log:

MS-Windows users can install the required drivers in the little time the device appears: start the Device Manager (from Computer properties), attach the USB cable and wait until the MT65xx Preloader appears, quickly right-click on it and provide the drivers you downloaded. Once the driver are installed, the preloader device is displayed as MediaTek PreLoader USB VCOM Port. 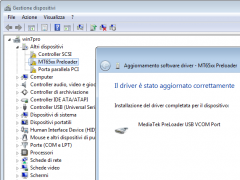 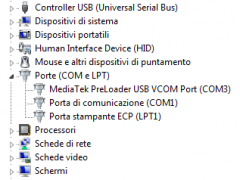 I don't know an offical repository for the driveres, here you can find an unverified archive: MT6577 USB VCOM drivers.rar.

We used VRoot to gain root access, which is simple and effective. The only drawback is that the procedure leave some useless apps into the phone and the superuser rights management apps is in Chinese. Other people suggest to use Kingo Android ROOT, which is otherwise suspected to stole personal data when rooting.

VRoot with PC and USB cable

I tried Framaroot and Towelroot without success. Both are Android apps which exploit some operating system or kernel bugs:

So I tried VRoot, which is a Microsoft Windows program capable of rooting several phones using the USB cable. It seems that only recent versions are capable of rooting my device, I used 1.7.9.9730 Chinese version. The rooting went fine, the only drawback is that you will find some Chineese apps instelled on the phone, many are useless, just one is the superuser rigths management app, which is to be replaced with Superuser by ChainsDD.

The procedure, tested on Windows 7, is:

In order to verify that root permissions are working, I installed the Terminal Emulator app by Jack Palevich. In the terminal I typed the su command (which is installed by the rooting process) and the Chinese app for superuser rigths management popped up asking for confirmation. The button on the right means Allow.

Afer rooting with VRoot we found three Chinese apps installed on the phone, one is used to manage superuser permissions, but we want to install SuperSU by Chainfire instead (we tried also Superuser by ChainsDD, but it was unable to automatically replace the Chinese counterpart). This is the procedure:

To remove the crapware installed by VRoot look into the /data/app/ and /system/app/ directories (look at the timestamps to understand when they were downloaded). We found the following packages:

For the user applications, just open the app manager and uninstall them. For the system ones it is possibile tu use some uninstaller like App Master, which obviously requires root privileges. That application (at least v. 5.4.0) does not clean every trace of the app, it does not remove the /data/data/<package>/ directory and the package section into /data/system/packages.xml file, so a manual method is better.

This is the manual procedure to remove a system app:

Another system app, which comes with the stock ROM, is the Google Pinyin Input Method (PinyinIME.apk), the Chinese name is 谷歌拼音输入法. This is an input method (keyboard) for Chinese language. Remove it if you don't want to write Chinese.

The device is advertised as containing 2 Gb of RAM, but this is a plain fake!

Afer you have rooted the phone and installed the busybox app by Stephen Stericson, you can check the real free memory with the free command:

This is the actual storage layout of the Kingelon G9000 (see Android memory):

The device is advertised as per 16 Gb of storage space, but even without root permission you can see that something is different (in the terminal):

With root permission you can see the truth:

The three partitions of 3.9 Gb are really the same device, just check the mounted devices:

The storage is based on EMMC (Embedded MultiMedia Card):

The phone enters the fastboot mode using the adb command from the attached PC (requires root on the PC):

I tried the bootloader unlock command:

The phone warns about unlocking risks and deleting all the user data (screenshot #2), but it seems that there is a problem with the key mapping, because the only working key is volume UP, which does not confirm the unlock operation, but it just returns into a not working boot menu (screenshot #3).

I had to issue the reboot command from PC fastboot.

I tried to backup data using adb tool via the USB cable, but it fails if all the objects are included: the command never returns and the confirmation dialog on the phone does not dismiss as expected. I had to execute two separated backups:

The battery is labeled as 3800 mAh, an incredible high value! Is it real? 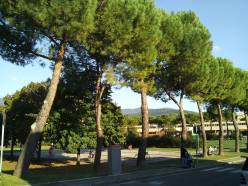 The back camera takes pictures at about 13 Mpixels (4160 x 3120). While colors are quite satisfying, the quality is poor indeed. With default settings in good light conditions, the noise in midrange shadows is rather visible, compression artifacts are also annoying. It seems also that some sort of sharpening filter is applied automatically: zoom at 1:1 or more to see the exagerated contrast of fine details.

The provided headset has a 3.5 mm jack with 4 poles (TRRS), but is has a non-standard length. I tried some other headsets, but they are not recognized: no “headset” icon in the status bar. Using a third party headset the FM radio application does not work, because it requires an headset plugged.

The pinout seems to be iPhone-like: left, right, ground and mic (Tip, Ring, Ring, Sleeve), so I wired an adapter cable “4 to 3 poles” to get the audio into my car, but only the left channel is working. To change the audio routing I used the SoundAbout app by David Woods.

Someone reported that extending the length of the jack can solve the problem; it requires a small lathe to modify the jack.

This is the state with data connection enabled, WiFi disabled:

After three months of use, the phone started suffering from charging problem.

Sometimes the orange LED did not light-up when the power adapter was plugged; sometimes a crazy loop of messages charger plugged - charger unplugged begun, which can result in phone crash. Sometimes, when the phone was plugged for the nightly charge, the orange LED turned on, but the morning after the phone was completely discharged ad the LED was off. Sometimes applying a light force to the USB connector (blending it toward the back of the phone) seemed to help, but everything was extremly unreliable.

It was not a cable or connector problem, it turned out that the power connector required a soldering reflow. Fortunately only a partial disassemble of the phone was required: just removing the back frame you can detach the power board. 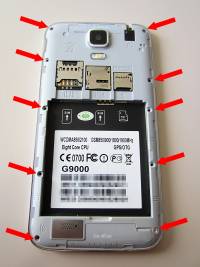 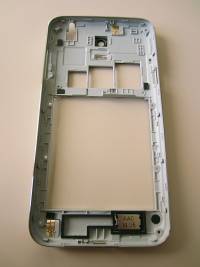 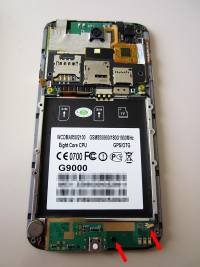 Remove the 10 screws which keep the back frame. Divaricate the metal-plated frame from the screen glass using your thumb's nails. Facing the screen: the glass comes toward you and the frames goes to the back. Beware of the volume and power buttons. 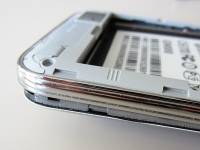 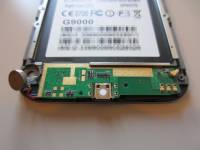 Now you can rotate the power board and see the flat connector. The white piece of plastic keeps the connector locked-in: flip it, so the connector is released. 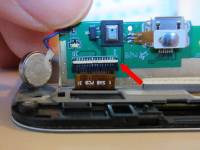 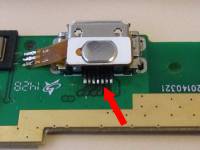 Now the power board is free and you can reflow the soldering. I put very little soldering flux over the contacts, a bit of tin (a good silver-alloy) on the soldering iron. I used a 2 mm soldering tip, larger than the contacts, so I used very few tin for a very short time. Clean the flux with a needle, cotton swab and alcohol; inspect closely to avoid short-circuits.

After some days of use, it seems that the charging problem is solved.