This is how to fit an AUX connector to an old Sony boombox. I had just to purchase a little DPDT switch (double pole, double throw) and a 3.5 mm stereo jack socket; the switch is used to select normal radio input or AUX input.

The audio quality playing from a cheap mp3 player is quite good. Other solutions based on injecting the audio signal into the cable going to the tape head are far too bad, suffering audio distortion and requiring the play button to be kept pressed (and the tape motor running) while playing mp3 audio.

I tried also a Cassette tape adaptor, but the audio quality was very poor. 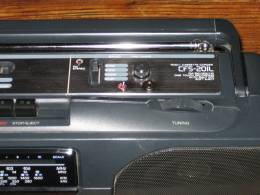 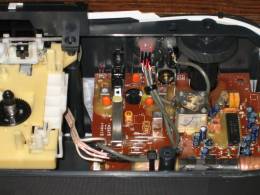 On the tuner board you can see the 5 poles connector going to the audio board. The schematic found on the Sony CFS-201 service manual is a bit different from the actual CFS-201L; fortunately on the printed circuit itself there is the serigraphy marking the (-), L and R pins near the connector: the negative pole, the left and right channel. So I was able to cut the three wires and make the by-pass through the switch.

The switch was for printed circuit montage, so I fixed it to the case with epossidic bicomponent glue. The same is for the stereo socket.