Purchased on February 2021 for about 23 Euros because I needed a router with both 2.4 and 5 GHz WiFi.

It seems that the stock firmware (version 0.9.1 4.16) is practically unusable; while ping times seem OK, loading an average web page with many images on it, get stuck in the middle, with several non-loaded pieces (images, JavaScript, ect.), causing a disaster web experience. The old TL-WR741ND with half the RAM, outperforms this new one by far! 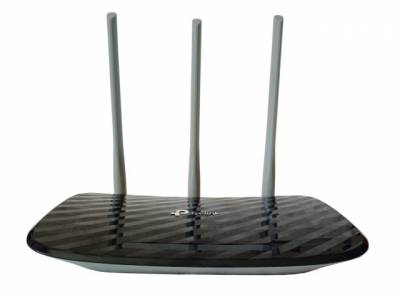 NOTICE: It seems that the problem of poor web performances is solved with the original TP-Link firmware 0.9.1 4.17; I downloaded that version from the TP-Link site and flashed it above OpenWrt following the procedure explained below.

However the winning choice for me is to install OpenWrt on it. Fortunately enough OpenWrt v.19.07.6 was compiled for this device and it works quite well, supporting dual band WiFi.

This is the step-by-step procedure that I followed, using my Debian GNU/Linux PC as my workstation.

An TFTP client on the router will start automatically in about 7 seconds, when the TFTP request is started, you can release the reset button. Check /var/log/syslog for tftpd activity (notice the filename requested).

You can sniff the TFTP traffic usgin tcpdump:

The power LED will start blinking, after 2 minutes the blink stops.

The first thing to do is to set a password from System ⇒ Administration ⇒ Router Password, the OpenWrt LuCI Web Interface is accessible at:

Reverting to the official TP-Link firmware

Once you have installed OpenWrt on the router, It seems that there are four methods to revert to an official TP-Link firmare:

The official images are intended to be uploaded into the router via the official TP-Link firmware web interface only, but we have OpenWrt now, so it is not an option!

Is the official firmware suitable to be flashed via TFTP? For some models it seems possible (see the link below about the TL-WR1043ND model), but in my case it failed. After the TFTP procedure finished, the router did not reboot properly and it become bricked. Fortunately enough, it seems that the bootloader in this model is safe even against bad flashes (does it have a safe dual boot?), so it was possible to repeat the OpenWrt TFTP flash procedure.

The reasons why this procedure failed is unclear. Something to investigate: the OpenWrt image seems to contain two U-Boot bootloaders, one block of LZMA compressed data and a Squashfs filesystem. The official firmware has only one U-Boot.

The second and third methods (OpenWrt web interface or ssh with mtd) requires a stripped version of the firmare. Information about this is scarce, many people share stripped images without sharing the recipe to obtain them (shame on them!). Common tradition says that you should remove the boot loader from the begin of the image, but it is not clear to me if some sort of header should be added anyway.

I did not tried this procedure due lack of information. I just learned about the binwalk tool (installed with the same name Debian package), which is able to guess the content of a firmware image; here it is an example run against the official 0.9.1 4.17 EU image:

Generally speaking, if an image file has a name containing the boot word, it contains the bootloader coode.

On the other hand, writing an image from the ssh command line requires you to know also the name of the partition, it should be something like:

I gave up trying the previous methods once I discovered a nice feature of this router: it has an emergency web firmware upload mode which should start automatically if a flashing procedure fails. To force that mode to start, it is sufficient to write 4 bytes at the begin of the /dev/mtdblock8 partition. I wish to thank user dxdt which found this trick haking the boot procedure and was so kind to share his finding.

So, once installed OpenWrt and accessed the command line via ssh, write the magic 4 bytes:

Now you can power-cycle the router and wait that it will come back serving a web page at the address http://192.168.0.1/. Here you can upload the original stock TP-Link firmware. 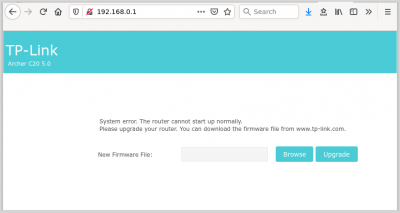 Once OpenWrt 19.07.6 is installed, this is the free space on the flash memory:

We installed the following packages:

With older versions of OpenWrt (e.g. version 14.07 Barrier Breaker) we used openvpn-polarssl, which was a version of OpenVPN with SSL support provided by libpolarssl, a lightweigth SSL library. That version seems not longer available, so we opted for openvpn-openssl which depends on the full libopenssl1.1. This has the advantage that we can install the libustream-openssl* and the ca-bundle packages and have e.g. the wget able to open https URLs.

We preferred etherwake instaead of wakeonlan because the latter depends on perl which is a large package and the free space is not sufficient.