How to Gain root Privileges

There are several recipes on the net on how to root this phone, many of them does not apply to my phone, may be because they are plain wrong, or may be because they apply to phones with firmware older than mine. The recipe I report here was applied with success on a Xiaomi Mi A1 purchased in October 2018. At the factory it has an Android Oreo 8.0.0, after the phone received an OTA update to Android Oreo 8.1.0 with Android security patch level October 5, 2018.

The process of rooting this phone can be broken down in some steps:

It seems that the process can be reverted leaving no tracks (the unlock step is the main concern for warranty, etc.). Unfortunately - at least in my case - the unlock procedure started also a factory reset, which means loosing all customization (installed apps. etc.) and user data.

For this procedure to work, we need two programs installed on our PC: adb and fastboot. They are command line tools from the Android SDK. Whenever we need to use adb or fastboot tools, we need to enable Developer options, enable USB debugging, connect the USB cable to the PC and tap “allow” on the phone pop-up. See below or search on the internet for a step-by-step guide.

In this process we used some binary files downloaded from the internet. Beware that we are downloading binary-compiled software that will run with root privileges on our phone! We have to trust the people which provide that, we cannot inspect the source code and there is not an easy step-by-step guide to compile from the sources by ourself. So we trusted the following internet pages (and people):

The official TWRP for Xiaomi Mi A1 page has only the bare TWRP Recovey image. We need an installer instead, because the recovery partition does not exist, the image must be embedded into the boot partition.

In order of appearance, we need: 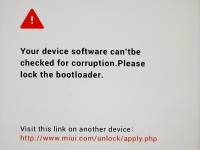 The first step will be to change the boot partition to replace the stock Recovery program with a custom one; so it is advisable to backup it first. Many Android devices have a dedicated partition to store the Recovery program, in this device we have instead the A/B system updates machanism, introduced by Google with Android 7.0 Nougat. So we don't have a recovery partition, but we have boot_a and boot_b partitions.

To ensure that the device has the A/B system updates instead of the recovery partition, we use the following command into the adb shell:

The meaning is: search into /dev/block/bootdevice/ for symbolic links boot_a and boot_b and take note of the actual partition names. You can see also that the recovery name does not exists.

Now we need to boot into an environment where we have root privileges, otherwise we cannot read the entire partitions. This means booting into the Fastboot Mode bootloader and load and run the TWRP Recovery program.

Wait several seconds untill the Fastboot logo appers, then execute this command on the PC:

This will load the TWRP Recovery program on the phone (it just upload in RAM, does not write to flash) and boot from that. If the phone is not unlocked, the command will fail. The TWRP running on the phone will allow the adb program from the PC to access the system with root privileges, so we can finally backup the partitions on our PC:

With the phone booted in standard system mode, upload the TWRP installer to the storage. As explained above, this phone has the A/B system partitions, so it is not possible to flash an image file to the Recovery partition (which does not exists), we need an installer which will modify the boot_a or boot_b partition (which one is active at the moment).

We upload also the Magisk program (the su binary stuff and the management app), which we will use later.

As seen above, we have to reboot in Fastboot Mode and load the TWRP Recovery from RAM (allow the required time to the phone to start into Fastboot):

Once that TWRP is started on the phone, swipe to allow writing to the partitions, then choose Install and browse to the Twrp-recoveryInstaller-3.2.1-2-oreo.zip archive.

After the installation, the procedure will ask us if we want to install the TWRP App, we answered no.You can answer yes, but it is not strictly required, the TWRP Recovery is a stand-alone program, it runs when requested without an underlying Android system and it does not require any App. The TWRP App may be used to install or upgrade the TWRP Recovery and to backup the existing Recovery, but it seems that the current version (1.19) is not able to handle the A/B system updates mechanism, it searches for the recovery partition, which does not exist in Xiaomi Mi A1 Oreo 8.1.0. So it's best not to use it. 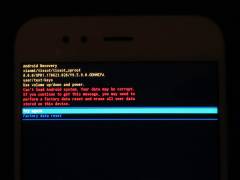 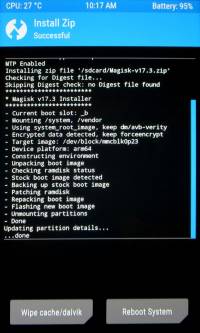 When rooting an Android device we generally need the su binary program (the actual Unix tool used to switch from normal user to root), plus an app to manage superuser permissions granted (or denied) to other applications. Historically the most known app for this purpose was SuperSU by Chainfire, but something changed. Chainfire retired from SuperSU development in October 2017 and new protecting schemas were introduced by Google into Android, mainly SafetyNet and dm-verity. The new leading-edge app for su management appears to be Magisk.

The first step is to install the ZIP archive which provides the su binary, we already copied the Magisk-v17.3.zip file to the phone storage. Let's reboot into TWRP Recovery executing from the connected PC the following command:

Alternatively we can power-off the phone, then power it on using the button combination VolumeUp + Power. From the TWRP main screen, choose Install and browse the filesystem to the Magisk-v17.3.zip file. After the install succeeded, reboot into normal system.

The su binary by itself is not sufficient to use root privileges, we need to install also the management app. Use the phone's file manager to find the MagiskManager-v6.0.1.apk and install it, granting the install unknown apps permission as requested. We have root permission, finally! Check via adb:

When an app requires root privileges, the Magisk management app will show a pop-up on the phone, allowing to grant or deny the permission, so be sure that the phone is not in screen-locked mode.

Android devices have a feature called Android Recovery Mode, which allows users to fix some problems. Technically, Recovery Mode refers to a special bootable partition, which contains a recovery application installed in it. The Xiaomi Mi A1 does not actually have a recovery partition, the recovery program is installed into the boot A and boot B partitions instead. You can use the Recovery from official stock ROM, or you can install a custom recovery, as the famous (and very rich in features) TWRP Recovery.

To enter the Recover mode you can follow one of this ways:

If you have installed the TWRP Recovery, its main screen will appear. If you have the stock ROM Recovery you have to: 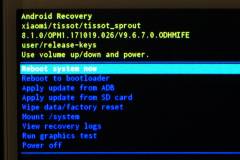 When the phone is booted in normal system, you can reboot in Recovery mode by issuing the following command from an attached PC:

In Android, fastboot is a special diagnostic protocol that you can boot your Android device into. While in fastboot, you can modify the file system images from a computer over a USB connection.

You can start fastboot mode in severl ways:

The Xiaomi Mi A1 will show the following image when in fastboot mode: 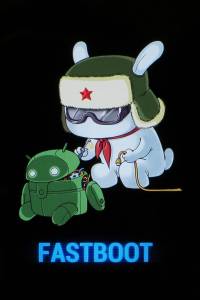 Here are some commands that can be used in fastboot mode:

Using a connected PC and adb:

Some app requires special settings to run properly, e.g. DAVdroid needs to sync contacts and calendar events in background and does not like battery optimization enforced by Xiaomi's Android. You can control this setting from here:

In November 2019 my phone still was running the following:

The phone automatically warns about the availability of an OTA (On The Air) Upgrade. You can also check for upgrades availability by tapping Settings ⇒ System ⇒ System Updates.

If you allow downloading and installing the upgrade, a check will be performed about the integrity of the boot image and the system image, before the actual install. The check will fail and the upgrade will be aborted if one or both of these two conditions is true:

To escape from the first condition, it is sufficient to restore the boot partition from the original backup. You will loose root and TWRP Recovery, but you can reinstall them after the upgrade. If you have just installed Magisk, uninstalling it should be sufficient and rather simple. Start the Magisk Manager app, disable and uninstall all the modules (if any) and reboot. Then run Magisk Manager again and choose to uninstall it completely. But if you have installed also TWRP you have to recover from a backup image. This is the recipe to run from a PC command line (supposing that active partition is B and that you have the original boot_b.img dump):

Allowing automatic OTA upgrade after tampering the /system partition is more painful: you have to restore system partition by flashing it in fastboot mode. Obviously you need the original system.img file, either from your own backup or from factory ROM archive. Fortunately enough Xiaomi provides full stock ROM archives of the various versions. Look at this forum post and search for your version.

Once you extracted the system.img file from the archive, boot in fastboot mode and execute the following from an attached PC (once again your active partition is B):

The file is actualy a Jar archive. The jar executable is provided by the Debian package openjdk-8-jdk-headless (or whatever version of Java you have), and you can use it in this way:

The main content is a payload.bin, in our case it was an incremental update (November 2018 Security patches), with size of about 66 Mb. It seems that there is a tool able to extract the content of that payload files, see Extract files from OTA payload.bin full and incremental.