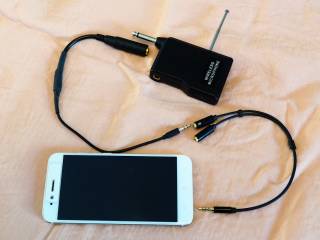 On a Xiaomi Mi A1 smartphone, which has a TRRS 3.5 mm jack, CTIA standard, we measured a bias current of 2.19 volt between the microphone (sleeve) and the ground (ring).

Another parameter which should be considered is the impedence, but unfortunatelly it is generally impossibile to find documentation about what is expected by the smartphone and what is offered by the microphone.

Once completed the electrical connection and acknowledged that automatic detection of the external microphone does not work, I decided to use the Lesser AudioSwitch app, which allows switching between the internal speaker/microphone and the external headset/mic by a button tap.

To realize the electrical connection explained in the above table, I used a mic/headphone splitter cable: the CTIA 4-poles male jack goes into the smartphone, the headphone female jack is left unconnected, the mic female Jack is connected to a self-made adapter cable featuring a 3.5 mm TRS male jack and a 1/4“ TS female jack. Finally the UHF receiver is connected using the 1/4” jack.

The resulting recording is quite good: a 48 kHz 16 bits file with good sound quality and low noise.