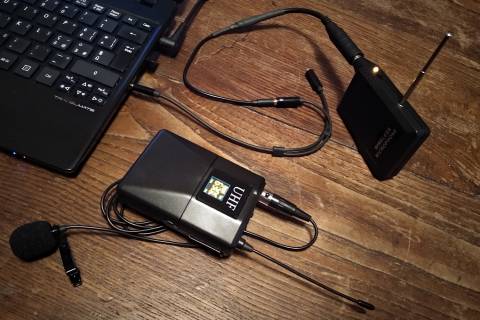 How to record audio using a wireless microphone connected to the audio jack of an Acer TravelMate TMB113-E, running Debian GNU/Linux 10 Buster.

The microphone is a lavalier one, with an UHF (630 MHz) belt transmitter and a receiver mounted on a 1/4“ TS jack. I am mainly interested in recording using command line tools.

I used an headset/microphone split cable to connect to the 3.5 mm CTIA audio jack of the Acer TravelMante and a self-made cable to adapt the TRS 3.5 mm mic jack to the 1/4” TS jack. The overall pinout is as follow:

As you can see, nothing is reported about the microphone. Beside that the bias current does not appear on the microphone jack. A workaround is to run the hdajackretask tool (from the alsa-tools-gui Debian package). That (experimental) program is capable to force the connection of Pin 0x19:

In some cases the hdajackretask is unable to perform the Apply now function because the audio device is in use, so you get the following error message:

The culprit can be some PulseAudio or ALSA process, or something else which is using the snd-hda-intel kernel module. I tried several commands to free the audio device, stopping user and system services:

I was unable to free the module on a Debian 10 with XFCE, so I tried the Install boot override button of hdajackretask. This option will add a modprobe configuration file /etc/modprobe.d/hda-jack-retask.conf containing the following line:

This will pass the patch option on module loading, using the content of the file /lib/firmware/hda-jack-retask.fw which is created by hdajackretask too. The file contains the hex values for the retask of each pin, something like this:

The pincfg hex values are shown on stdout by hdajackretask when you press the Apply now button, so you can take note and build different files for different scenarios to use during bootstrap. For the TBM113-E the normal status of pin 0x19 corresponds to the value 0x411111f0, whereas the override status (plugged microphone) is 0x03a19020.

If instead the override is made at bootstrap via the modules patch option, the settings survive after the hibernation: you can see the jack/microphone MICROPHONE plug ACPI event after the resume.

Setting the recording volume with PulseAudio

I used the PulseAudio mixer pavucontrol to set the recording volume level: it turned out that a value of 16463 (corresponding to 25% of the slider, or -36.00 dB) is the best setting for normal speach. At the ALSA level (lower level interface used by PulseAudio) it means a Capture level of 100 and a Mic Boost of 0. This is a table of value correspondence between PulseAudio and ALSA (notice that it is specific to this PCI sound card):

You can check the correspondence between PulseAudio and ALSA levels by executing alsamixer, pavucontrol and pacmd list-sources commands. The settings you make in PulseAudio will be reflected in ALSA, and vice-versa.

Using the command pacmd list-sources you can discover the name of the device.class of type sound, the current volume level, the base volume and the ports (microphones) availables.

The recording volume should be a vaule between the base volume and 65536 (corresponding to 100%, or 0.00 dB). Every different hardware should be tested to find the best settings to get a clear and loud sound, but to avoid clipping (out of scale samples).

Once you understand the output of pacmd list-sources, it is very simple to activate the recording using a command line script:

The result is a 44100 Hz, 16 bit little-endian, mono audio file, quite satisfactory for quality and low background noise.

Having set the pin 19 forcibly to microphone, I often noticed that microphone plug/unplug events are reported continously (about every 3 seconds) by the ACPI subsystem:

Fortunately enough, when I start recording audio with parecord, the plug event occurs and the microphone stay stably plugged throughout the recording time.