GNU/Linux on the Teclast F6 notebook

Before installing GNU/Linux on the SSD, I tried the hardware compatibility using a Debian Live distribution. Starting from the Debian Live Home Page, I searched the amd64 architecture and the unofficial images which include non-free firmwares. So I downloaded the debian-live-10.6.0-amd64-xfce+nonfree.iso file. The file is to be copied over an USB stick using dd.

Entering BIOS and booting from an USB stick

Insert the Debian Live USB stick into an USB port and press the Power key for some seconds untill the green LED lits, then press the Delete or the ESC key to enter the BIOS setup program.

The first setting I made, was to allow the message Press <DEL> or <ESC> to enter setup to be seen during bootstrap:

Then I verified that Secure Boot is disabled, but UEFI boot mode is enabled:

Into the setup progam, navigate to Boot ⇒ FIXED BOOT ORDER Policy and select as Boot Option #1 something like USB Key:UEFI: FLASH Drive 3S_USB20 1.00, Partition 1 (your USB label will be different). As you can see, the notebook sensed the USB stick and detected that it is in USB Key:UEFI format. Other bootable USB images may be of type USB CD/DVD:UEFI (e.g. the Debian Netinst).

Exit the BIOS setup program by choosing Save & Exit ⇒ Save Changes and Reset.

Testing the hardware with Debian Live

With the Debian Live running from the USB key, I have checked the operation of some computer peripherals.

Debian Live gives you the NetworkManager Applet to manage WiFi networks: everything works as expected.

Using alsamixer I set the proper volume for Master and Capture (press F5 to show both), then I used the following commands to check audio playback and audio recording:

The playback quality is acceptable, given the small size of the speakers positioned under the notebook. The recording instead is quite disturbed by a background noise, infact I had to pull up the capture volume to 75, otherwise the microphone seems to be quite deaf.

I installed the guvcview package to test the integrated webcam:

Once started, the program immediately recognizes the device and starts to display the video. The camera does a decent job about image sharpness and white balance, even in low lit conditions.

Speaking about the image quality: I barely notice some improvements acquiring at 1600×1200 instead of 640×480. Rather guvcview seems to do a better color balance at the lower resolution. The following images were acquired at 1600×1200 and 640×480 respectively (click to view at full resolution): 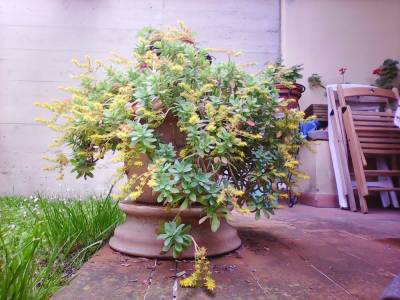 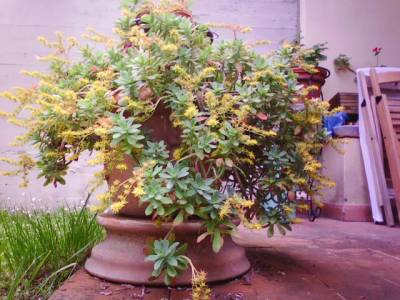 memtest86+ (does not start)

However I was able to boot the GRML amd64 2020.06 live distribution (just plug the USB stick, enter the BIOS and select the relative USB Key:UEFI boot entry). Once booted, the GRML live contains the memtester program, which can be launched asking to test 7 Gb of memory, for three times:

The Debian Live distribution offers the Install Debian incon on the desktop, just click it to start the installation.

During the install process, I selected the manual disk partitioning, because I want to specify a separate partition for the /home directory. During that step I removed all the existing partitions, except the UEFI one, which was sda1 with size of 100 Mb and formatted as FAT32; manually I added a mounting point for it under /boot/efi.

At the end of the installation of the operating system, the correct boot priority should be automatically selected. The boot option is choosen from the ones installed by each O.S. installation, into the UEFI partition. Using a GNU/Linux system you can use the efibootmgr tool to list the available options and to set the right priority.

With the following command you can see the existing UEFI system partitions:

The Debian installation program installed two EFI images: SHIMX64.EFI and GRUBX64.EFI; the first is to be used if Secure Boot is enabled (shim is a simple first-stage bootloader, signed for Secure Boot), whereas GRUBX64.EFI is the standard GRUB image.

If you want to set the priority, you can use a command like this:

In our case the installation program did not properly set the boot priority: Windows was still the first choice. Also an attempt to manually use efibootmgr did not succeded. It was necessary to enter the BIOS setup and adjust the relevant item Boot ⇒ UEFI Hard Disk Drive BBS Priorities (where BBS stands for BIOS Boot Specification):

Hibernation (suspend to disk) works: you just have to provide a swap partition large at least as the available RAM.

The Teclast F6 notebook is equipped with an SSD module in the M.2 2280 form factor. The housing accepts only 80 mm length modules, because it has only one screw position. Changing the SSD module is rather simple: just remove two screws and pull-out the cover. 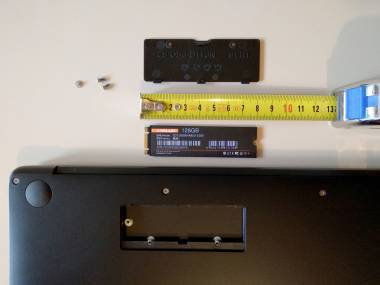 As you can see from the gnome-disks benchmarks below, the new Samsung 860 EVO 500 Gb SSD operates at about 283 Mb/s average read speed and at about 259 Mb/s write speed. On the other hand the factory installed Teclast SSD operates at very similar rates, showing some glitches in writing speed, but with a lower averages access time: 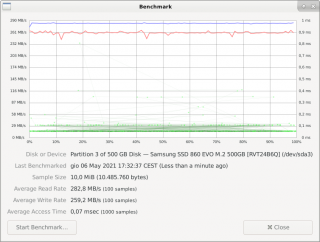 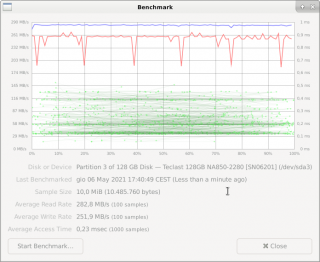 Controlling backlight from the command line

You can control the backlight level from the command line (root privileges is required to write):

You can use xrandr to simulate brightness control in software (the image is dimmed, but backlight remains actually the same):

After a year and a half of use the battery is practically exhausted: the autonomy of the laptop has gone from the initial 6 hours to about 1 hour and a half.